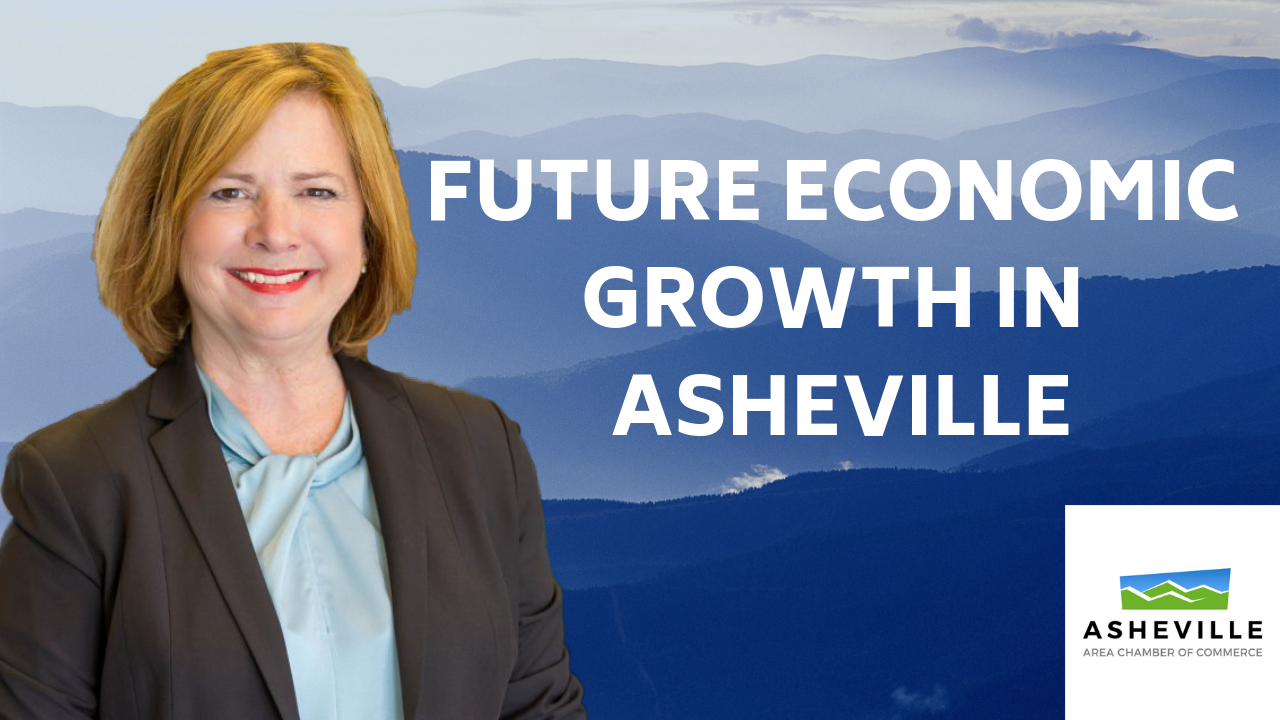 As any local resident knows, our city has seen a lot of growth and economic development in Asheville the past several years.  Hotels, breweries, and everything in between has sprung up across town, and the people – both residents and tourists – have followed.  While there are a few obvious benefits and problems of this economic growth in Asheville, it also presents less plain opportunities and challenges. To help us better understand our changing city and how citizens can help to shape it, Kit Cramer, President, and CEO of the Asheville Chamber of Commerce, joined us in the Asheville Real Estate News studio to discuss her background, the local economy, the future of economic development in Asheville, and more.

Cramer, who has worked extensively in a variety of public policy capacities since the early 90s, is uniquely suited to guiding Asheville through its current phase of growth.  She worked for the Charlotte Chamber of Commerce for 17 years, in everything from communications and public policy to economic development. Following her time in Charlotte, she moved to Washington D.C. to work with the International Downtown Association, helping to shape the downtown areas of cities across the world.  Combined, this experience provided her with the insight needed to successfully guide and plan for the growth of Asheville; her biggest overall take away from her prior experience was that she saw many instances of both moderate and tremendous growth, learned about the fundamentals of what makes a good community, and developed an understanding of how to handle and apply this knowledge.

This experience has also given Cramer perspective on what’s really going on in Asheville, which can be difficult for long-term residents to see at times.  “I think we have some basic misunderstandings about our economy here,” she says. “The growth has been good, but it isn’t exponential.” In general, according to Cramer, those who have lived in Asheville for some time tend to think that the city has experienced more growth than it actually has, and may see this change as a negative thing.  In reality, she says, “it’s been healthy growth.” A lot of long-term residents want Asheville to stay exactly the way that it was when they first fell in love with it and would prefer to have nothing ever change. But that isn’t realistic, Cramer says, nor would it be a good thing on the whole. “We’re going through a lot of change here, and change is the only thing that’s inevitable.”  This inevitability has helped to shape one of her primary goals with the Chamber: “it’s been trying to help people figure out how to navigate that change.”

There are a few ways in which she feels that this can be done, one of which involves raising awareness about both the positive and negative factors of economic growth.  In particular, Cramer cites two major instances of growth in Asheville, which she sees as largely representative of the changing city. First, she points to the arrival of Linamar, a Canada-based manufacturing company, in Asheville.  Linamar, according to Cramer, has invested significantly in property in the city – that investment translates to property tax, she says, which enables the city to accomplish more of its goals. In short, Asheville has to “do well to do good.”

Another major driver of growth that Cramer points out is New Belgium – the brewery arrived in Asheville in 2016, immediately making a positive impact on the area.  The company’s core values, Cramer says, align perfectly with those of Asheville – they are focused on community, environmental stewardship, and more. New Belgium took undesirable, poorly developed land and turned it into something beautiful and productive, Cramer says.  Their interest in the health and wellbeing of their employees extends to the community as a whole, and that’s undoubtedly a positive thing for the city. There are, of course, concerns that come with this type of development as well. “Along with the good come the issues that you then have to address,” Cramer says, including rising expenses in the housing market in West Asheville and the River Arts District.

To help remain aware of and account for those changing factors in the community, the Chamber develops an economic, strategic plan every five years.  But, says Cramer, there may be a need to do so more frequently. As growth speeds up, it becomes difficult to focus on a long-term plan. To help them learn how to do so, the Chamber hired an expert futurist to examine trends in Asheville that are likely to be impactful in the future, and has made it, its goal to consult with a broad cross-section of the community rather than just the typical group of business owners that tend to be included in these conversations.

To that end, the Chamber has developed a survey that it is asking community members to participate in, which will help them to identify the successes and challenges of growth in Asheville as viewed by the community, in order to help guide future plans and goals.  The survey, available at AVLGreater.org, will enable city leaders to be selective about the issues that they present as priorities and to keep a community-driven end goal in mind and stay focused.  Cramer hopes to achieve at least 1% participation from the community, around 2,800 people, in order to obtain an accurate representation of residents’ views and opinions.

Cramer urges community members to visit AVLGreater.org to not only answer the survey but also to learn more about the current focus and steps being taken to guide the growth and development of the city that we’ve all come to know and love.

A Deep Dive Into the Numbers: Asheville Market

Investor to Agent – The First Closing