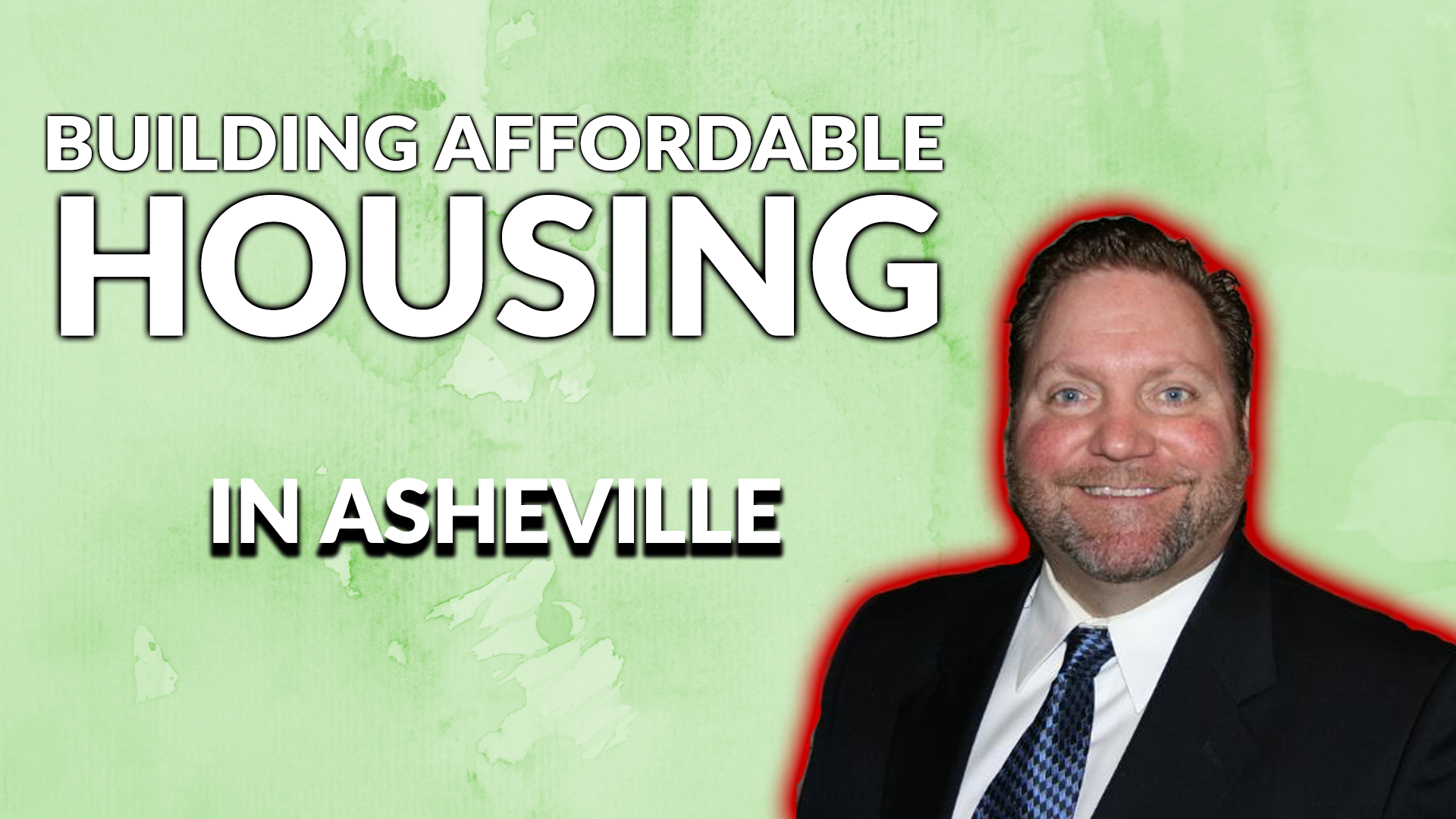 Whether it’s an issue they’ve struggled with personally or not, most everyone who lives in Asheville is aware of the affordable housing crisis facing our community.  With our unique environment and atmosphere, the city and surrounding areas make for a great place to live. The demand for housing that this livability drives, however, has not been matched by an equal supply.  This imbalance has resulted in high housing costs and a lack of affordable houses in Asheville. For Kirk Booth, the local real estate agent and developer behind Kirk Booth Real Estate, this is a very familiar problem and one that he actively works to combat through his everyday work.  Booth joined us in the Asheville Real Estate News studio to discuss the affordable housing problem in Asheville, what is currently being done to combat it, and what remains to be done.

Booth, who is originally from Asheville, grew up learning about real estate from his parents, both of whom were in the industry but didn’t immediately follow in their footsteps.  He began his career as a corporate pilot, but ultimately found himself right back where he started – in Asheville, working in real estate. Today, Booth primarily works to build housing on in-fill city lots, with an interest in helping to provide affordable housing to a market that desperately needs it.

By Booth’s definition, affordable housing is based on income and therefore, relative – for a home to be considered affordable, it must account for only a certain percentage of a household’s income.  Generally speaking, that number is often set at one-third of the household’s income. In Asheville, though, Booth often sees residents spending as much as half of their income on housing, and then perhaps another 25% on transportation.  That leaves only a quarter of their income to save and live on, and, Booth says, that’s simply not enough.

There is not, of course, a single easy fix to the problem.  “The solution is many-faceted,” Booth says, and will largely depend upon the city working together with developers to increase housing density and more evenly match the availability of housing with the number of people who need it.

One way to help achieve this goal, he says, is for the city to incentivize developers to build affordable housing.  Often, it can be difficult to attract developers to this type of project – the return on their investment is typically much lower than it would be if they followed a more typical path, and so both the right incentives and the right motivations have to be in place for such programs to be effective.  Unfortunately, the programs that currently exist can be difficult to access, and may not do enough to draw developers and make a difference. Existing programs, for example, may require that a developer already have traditional financing in place before the city even considers offering further support or funding; this, Booth says, can be a barrier to getting funding from the city and therefore an obstacle in the creation of affordable housing.

So what more can the city do to address the problem?  One possibility, Booth suggests, is for the city to incentivize developers to build on the land that is already owned by the city.  This will help to control land costs for the developers, and, coupled with the creation of high-density housing on these lots, can make these projects worthwhile for an otherwise reluctant developer.  Even so, developers taking this route will likely not be earning as much per unit as they might otherwise – that’s where the right mindset comes in.

Booth firmly believes that building affordable housing in Asheville, NC is the right thing to do, even if it nets him a smaller profit at the end of the day.  “It’s not about money; it’s about your philosophy. Providing housing for people is truly something that I want to do,” he says. “We offer housing to a whole array of different people who really if we don’t produce [affordable housing], they’re not going to be able to live here.”

It isn’t easy to be on either side of the equation, as a developer trying to mitigate the problem while still making a living or as a resident trying to find quality housing that won’t break the bank.  Either way, Booth says, you have to be in it for the long haul. Developers need to build with materials that will hold up over time and look at the bigger picture rather than just a quick profit, while tenants need to do their part to be responsible and courteous, building positive relationships and reducing costs for landlords.

On the whole, Booth says, the housing crisis in Asheville isn’t anything new – affordable housing in Asheville, NC has been hard to come by for quite some time, but incentive programs and a mindful community are finally beginning to catch up.  By taking a compassionate and progressive approach, he believes, developers, landlords, and residents can work together to help combat the problem and make a living in Asheville both affordable and enjoyable.

To find out more about how Kirk Booth and other real estate professionals are working to solve the housing crisis in Asheville, visit KirkBooth.com or contact Asheville Real Estate News at AVLRealEstateNews.com today!

INVESTING IN REAL ESTATE WITH YOUR RETIREMENT ACCOUNT | AREN 108