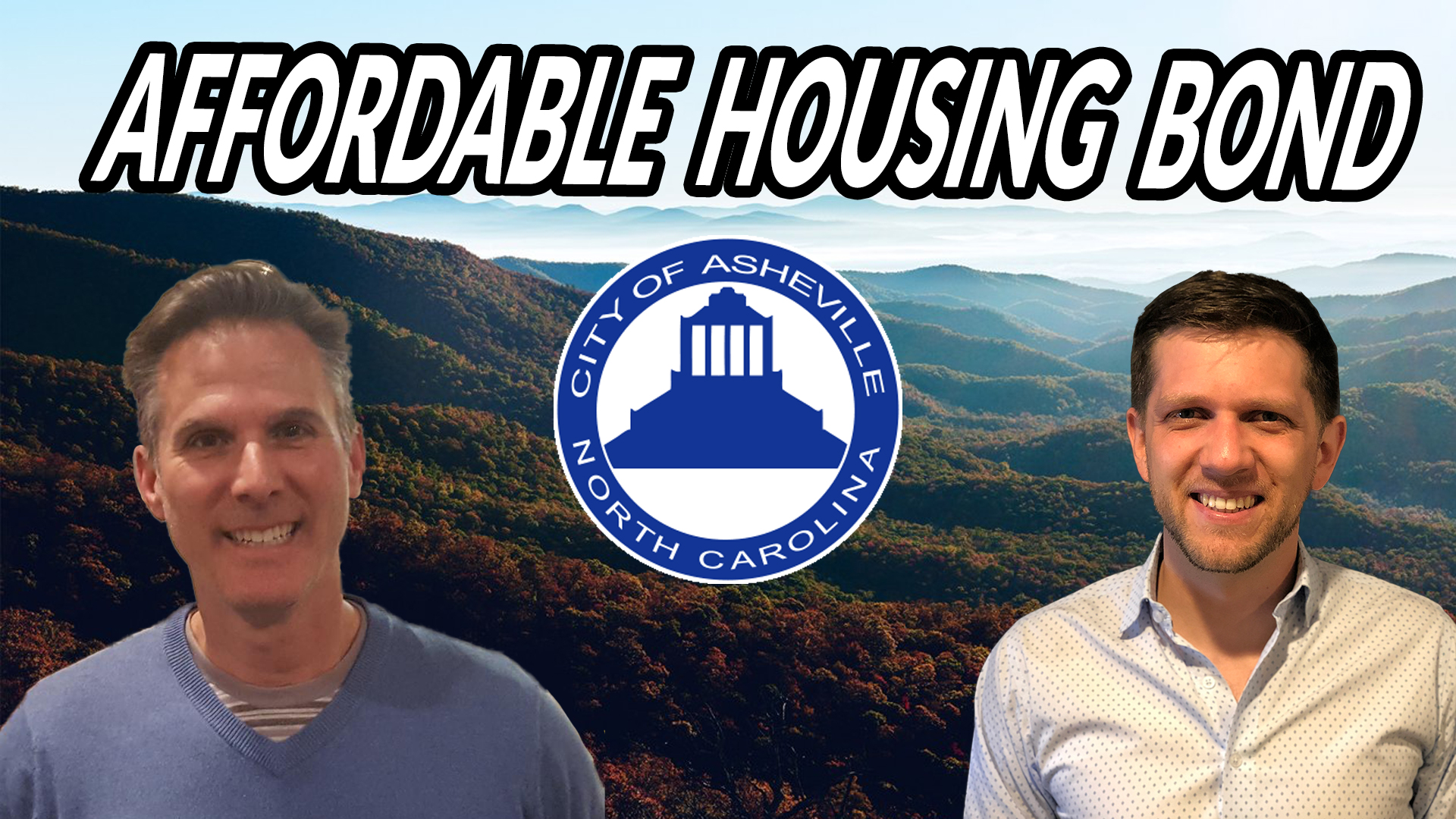 In November 2016, the city created a $25M Asheville affordable housing bond. On the surface of the housing crisis in Asheville, the simple solution makes sense – build more housing. If supply rises to meet the demand, the market will even itself out.  In theory, the principle is sound. But as both newcomers and locals know, it’s never quite that easy in Asheville. For some time, both buyers and renters in Asheville have struggled to find affordable housing, unable to afford much of what’s on offer for a variety of reasons.  In recent years, the City has become increasingly aware of this problem and has begun to put programs and funding in place to work towards solving the ongoing crisis. To help us better understand the range of programs available, from down payment assistance to incentives for developers, we asked Paul D’Angelo, the affordable housing expert and housing development specialist of the Community Development Department, and Nikki Reid, Asheville’s Real Estate Program Director, to join us in the Asheville Real Estate News Studio.  We discussed the recent  Asheville affordable housing bond, the difficulties currently facing our community, and more – read on to find out what they had to say!

According to Reid, “the bond helped to provide additional resources for the city to get involved with the affordable housing crisis in our area.”  The dedication of city land to be used for affordable housing was critical to this end, she says, as was the incorporation of more financial resources for new and existing programs that enable the city to act as a lender to both individuals and developers.  Before the Asheville Affordable Housing bond, Reid says, the city’s role was significantly more limited. The programs that exist allowed the city to act as a lender using resources from the city budget that were directed towards a fund to invest in existing projects with an affordable housing return, but did little to develop new programs targeted towards individual homebuyers.  This, D’Angelo says, is a critical issue in the housing crisis – “no one should spend more than 30% of their gross income on housing,” he says, which includes not only rent or a mortgage payment, but also utilities, repairs, and so forth. In Asheville, many renters and homeowners spend as much as 50%, which, D’Angelo says, makes them “severely cost-burdened.”

The consequences of that cost burden are far-reaching – not only does it shut potential buyers out of the market, preventing them from investing in real estate in Asheville, but it also removes them from the local economy on a much broader scale.  Residents who are spending 50% of their income on housing have a much smaller budget for participating in other aspects of the economy, which can have a very real impact on local businesses and the health of the economy as a whole.

To help combat this problem, D’Angelo says, several pieces of the puzzle must be moved into place.  First, sufficient housing has to be available. To ensure that this is the case, the city needs to partner with developers.  The Housing Trust Fund allows for-profit developers – those who are motivated by the more traditional returns on their investments rather than by tax credits or personal fulfillment – to be pulled into affordable housing development, thereby increasing the capacity for the development of affordable housing in the city.  Also, tax-credit developers can be drawn in by programs like the land-use incentive grant and property-tax abatement. Even before the bond, Reid adds, the city did sell some city-owned land for affordable housing development, as to Habitat for Humanity. But the bond has enabled the city to expand that type of transaction, and has helped it to work towards “evolving into a more robust program.”

“As we grow as a city, the way that we start talking about these affordable housing communities is really just that – creating these sustainable communities,” she says.  And, because “a lot of city land-holdings are in really prime locations,” offering them for development presents possibilities for excellent equity outcomes for the city as well.

That’s all well and good, but how exactly does the city determine how to allocate available funding, and how does it make decisions about which projects to fund and the criteria that should be used to determine whether resources are offered?  In large part, D’Angelo and Reid say, it’s about using their resources in the best way possible, to create as much quality housing as possible in the most impactful locations. To that end, the city has used the $15 million set aside for high impact projects to develop multiple properties specifically targeted towards high-density affordable housing.  These properties, which include the 319 Biltmore property, the Lee Walker Heights property, the 91 Riverside Drive property, and properties along South Charlotte Street, are located in areas where the most significant impact could be achieved with the money available. The city wants to create as much density as possible while still maintaining a comfortable place to live, Reid says.

While the city owns the land on which these projects are to be built, it is not a developer itself.  But the housing bond, D’Angelo says, is also designed to “bring developers to the door.” It provides them with specific criteria and rewards for building affordable housing and ensures that they have numbers that they can work with.  The city, he says, looks to determine what kind of incentives it can offer that will draw developers in.

Increasing the availability of affordable housing is only half the battle, though – buyers still need to have the resources to invest in that housing.  That’s where the Asheville down payment assistance program comes into play. According to D’Angelo, the area median income for a family of four in Asheville is slightly over $61,000.  The housing bond tends to focus on families making 80% or less of that number – $48,000 for a family of four. While a family with that income might very well be able to afford monthly payments and upkeep on a home of their own, and might even find this to be more affordable than renting, it can be difficult to save up for a down payment of 20% or more in a very competitive market.  The down payment assistance program sets aside $1 million for buyers in that 80% bracket, enabling them to access up to $35,000 in assistance for a down payment on a home. For those households making under 60% of the area median income, up to $40,000 in assistance is available. Even those who make more than that 80% threshold have access to support if they work in community service jobs such as in the fire and police departments, schools, and so forth – these individuals can access up to $25,000 in assistance.

Of course, the city does its due diligence to ensure that it is making smart investments in people who are motivated and able to hold up their end of the bargain.  To do so, D’Angelo says, the city has developed criteria for creditworthiness, income, and so forth to prevent buyers from running into trouble. But, he says, the city and many of its residents still see homeownership as a means of building wealth and feel that by helping people get into their own homes they can begin to build wealth and economic mobility and stability.  “What the down payment assistance [program] wanted to do was really to target those folks who’ve been working towards homeownership, they can’t quite enter the market because they don’t really have that down payment assistance, that extra money that they need to get in there, that the numbers could actually work and they could be part of that economic stability to start and economic mobility hopefully moving forward.”

On the whole, Reid says, “we’re excited to see the policy go through.”  She looks forward to seeing progress with the development of city-owned land to create affordable housing.  “We’re really hoping to see things progress with the high-impact sites.” For D’Angelo, the reward lies in being able to address the housing crisis head-on.  “I’m always excited about how we’re trying to strategically work on and attack this problem as best we can with all of our tools and our available resources and finances.”  Both D’Angelo and Reid encourage residents to get involved and to share their ideas and solutions with the city. “If anyone’s got a great idea about affordable housing out there,” D’Angelo says, “they can reach out to us at any time.”  With collaboration from the city, its residents, and local developers, D’Angelo and Reid are hopeful and optimistic that the affordable housing crisis can be solved once and for all.

To share your thoughts or learn more about the Asheville down payment assistance program and other projects related to affordable housing in Asheville, visit AshevilleNC.gov/CityProperty or contact Paul D’Angelo directly at PDAngelo@AshevilleNC.gov.

INVESTING IN REAL ESTATE WITH YOUR RETIREMENT ACCOUNT | AREN 108