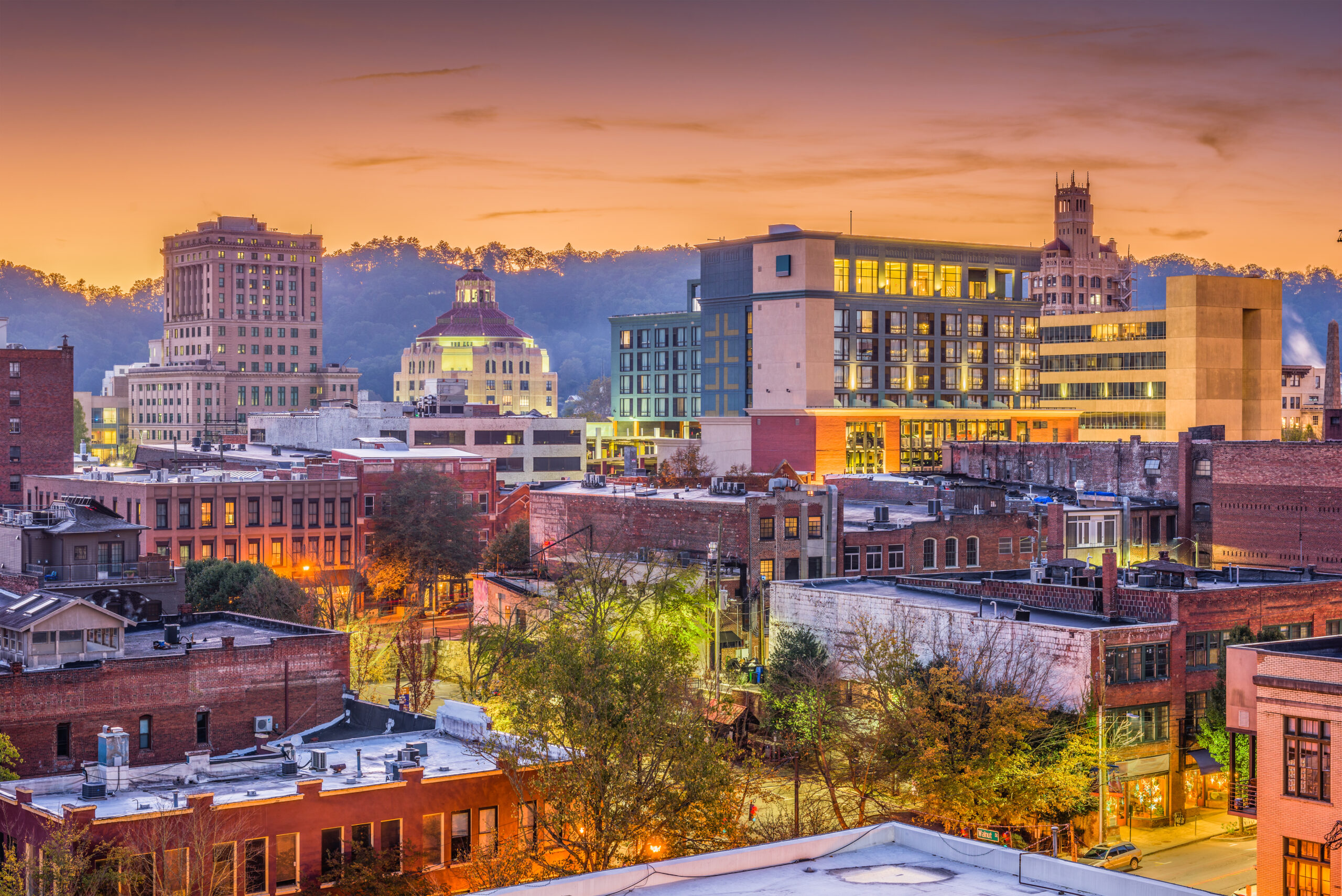 Some call it urban sprawl. Others view it as progress. Ultimately, given the city’s inevitable ongoing growth, we’re talking precise data collection and informed decision making.

We all know the complaints about Asheville’s growth and growing popularity as a tourism destination—traffic congestion, rising housing costs, lack of parking. And while it’s certainly important to address these concerns and continuously have a discourse about growing intentionally with solutions that can benefit both the public and private sectors, we also have to remember that America is dotted with dead or dying cities. Annually, 14% of Americans—about 40 million people—move at least once per year. USA Today reported in 2018 that “people are leaving in droves are places such as Chicago, Detroit, St. Louis, New York, and Los Angeles.” Here in North Carolina, “225 of the state’s 553 municipalities were estimated to have suffered a decline in population between 2010-2016, according to a recent study by the UNC Carolina Population Center. That amounts to approximately 41 percent of the state’s overall municipalities,” according to Tyler Newman’s report “Declining Carolina: The Up-and-Coming Ghost Towns of North Carolina.”

Lakesha McDay, Leadership Team at Dogwood Health Trust, emphasized the importance of appreciating Asheville’s growth at August’s Leadership Buzz Summer Series session, “What is Our Vision for a Connected Community?”  As McDay put it, “Reality is, Robbinsville closed a school. I could complain about traffic, but there’s another county experiencing a decline, and it’s detrimental. It’s easy to complain of what we see every day but [which] someone else would love. The growth is building up our economy and our infrastructure.”

Being a regional hub and a tourist destination certainly has its benefits, of course. David Ross, president of Falcon Construction, points out that “quality restaurants, shops, and businesses are thriving downtown. With the rents going up, it does push the less-performing tenants out. Good and bad, but that is a free market economy. I understand it but do still love the mix of businesses in Asheville.”

Joseph Minicozzi, the owner of Urban3, a local consulting firm that uses economic data to visualize the impact of policy on community design, also urges the community to keep hotel and other development in perspective. “We have eight hotels of luxury splendor and 250 visitor establishments. In 1930, our population was 60,000 and we had 30 hotels; now, hotels in downtown are only about 11. If you can get the ground plane right in an urban environment, that solves most of the problems. And at a compositional standpoint, the building should be composed architecturally to enhance the streetscape and fit in with the urban environment. If you look at the S&W Cafeteria and the Drhumor building next door, you can have two totally different styles side-by-side, yet they have a rhythm and composition that works well together—window patterns, doors, etc. There are commonly accepted urban design practices for both ground plane and composition,” he explains.

Of course, there are plenty of issues that need addressed, and long-time Ashevillian and Mosaic Realty realtor Elizabeth Putnam highlights a few issues she wants to see improve: “We need to continue to be mindful of steep slope ordinances and storm water management. Those issues pollute and clog our waterways. I don’t mind development, but I would like the city and county governments to do more to make sure the infrastructure exists before allowing more development is certain areas. I think we also need to remember what attracts people to Asheville. People love Asheville for its beauty and access the outdoors.”

The reality of Asheville’s growth in hard numbers isn’t quite as dramatic as, say, a Saturday on the South Slope might indicate, since Asheville has had the greatest population change of any city in North Carolina from daytime to nighttime by 49%. This is because, says Asheville mayor Esther Manheimer, “People come in to work, doctor, shop, tourists, but if you look at the breakdown, it’s the same number for tourism and non-tourism reasons. It feels very busy, and what that means, well, it means we have a robust economy with lowest unemployment of anywhere in the state.”

Take Concord, outside of Charlotte. They have the same population—around 90,000—but on any given day “we seem 10 times bigger,” Manheimer says, adding, “[and] for a city, what it means is that we have to manage from a financial standpoint the cost of hosting that many people every day of the year. Increased 911 volume, more people, but you’re not collecting more property taxes than Concord. What it can mean for the people in the city [is that] they are shouldering through their taxes the cost of having so many people in and out of our city on a daily basis. And we have to figure out how to better mix our revenue to manage those costs. The main source of money is through property taxes, but sales tax revenue is primarily through the state. For every .07 cents on the dollar, .04 cents go to Asheville. We have to better leverage the vibrant economy from a financial standpoint to help sustain the community. That’s the structure in North Carolina.”

Mayor Manheimer also points out that in actuality, our rate of growth is very moderate. “North Carolina is one of the fastest growing states in the nation, and Asheville’s [rate] is nowhere near the fastest growing city—Charlotte and Raleigh are growing much faster. We’re still growing, and that’s good in a sense, because cities that aren’t growing—that are atrophying like Baltimore—you’re either growing or you’re dying. We’ve really tried to educate ourselves about the best way to manage growth, and what that looks like is everything from trying to encourage density and infill rather than sprawl, retrofit roadways with transit by bus, biking, greenways, so we’re able to let people live here without a car, preserving green spaces.

“There’s all kinds of measures you’ve got to take to maintain that and grow.”

To help guide citywide policy decisions, Manheimer and other leaders worked together to create “Living Asheville: A Comprehensive Plan for Our Future.” Having this type of plan means the city is eligible for funding from both the state and federal governments. “You have to have your plans in place to jump on those grant opportunities,” she explains. “The whole project happening on the river—all of that came about came through before the funds were secured. When it started all coming together—$14 million in highway funds, $7 million in state transportation funds, and $5 million from Tourism Development Authority. If you don’t do that kind of advance planning and planning for growth, you’re going to end up with missed opportunities.”

Keeping an open mind about solutions that address capacity concerns is another part of the equation. For example, when affordable housing proposals are revealed, neighboring citizens will sometimes fight to keep the project from happening. “Not in my backyard is a big issue,” Ed Manning, Executive Director at Leadership Asheville at UNC Asheville, said at the Leadership Buzz event, adding, “We have to think about our backyards being bigger.”

Creating a better-connected Asheville with a major upgrade to our public transportation would also make a positive impact in reducing the effects of the growing pains and urban sprawl that are inevitable with a city as popular as Asheville. Vicki Meath, Executive Director of Just Economics, has a mission of working to educate, advocate, and organize for a just and sustainable local economy that works for all in North Carolina. She shared that in 2013, the organization created a 19-point agenda for transportation reform and in 2009 created a master plan to help advocate for the offerings the transit community needs. “[We’ve] worked on a number of different changes, everything [from] making sure there are more on the committee, to later night service, Sunday service, and a variety of things covered. We believe that when we focus on the needs of transit riders, we are building a system better for everyone; traffic, tourism business, and the environment,” she says.

And on a final bright note, Meath believes “Asheville can absorb double its population sustainably if we planned for it properly.” However, she urges that we have to fight for the best version and vision of Asheville: “Look at the mall retrofit project on Patton Avenue in West Asheville. The land in the I-240 right of way which should come back to Asheville should house at least 1,400 units of housing. This was drawn up by volunteers at the Asheville Design Center in 2005.

“This does beg the question, why are volunteers doing this and we’re not investing as a city? It’s still being debated by NCDOT. Why are we letting them have that control over our city when they have no legitimate, or legal, need for that land? This all the way out Patton to Leicester Highway. That corridor needs to grow up. But the street design needs to be modified to make that happen. We cannot expect Kmart to develop into something worthy of proper infill if the street is treated like a highway that facilitates sprawl out to Leicester.”

THE EFFECTS OF A PANDEMIC ON REAL ESTATE | PART 2