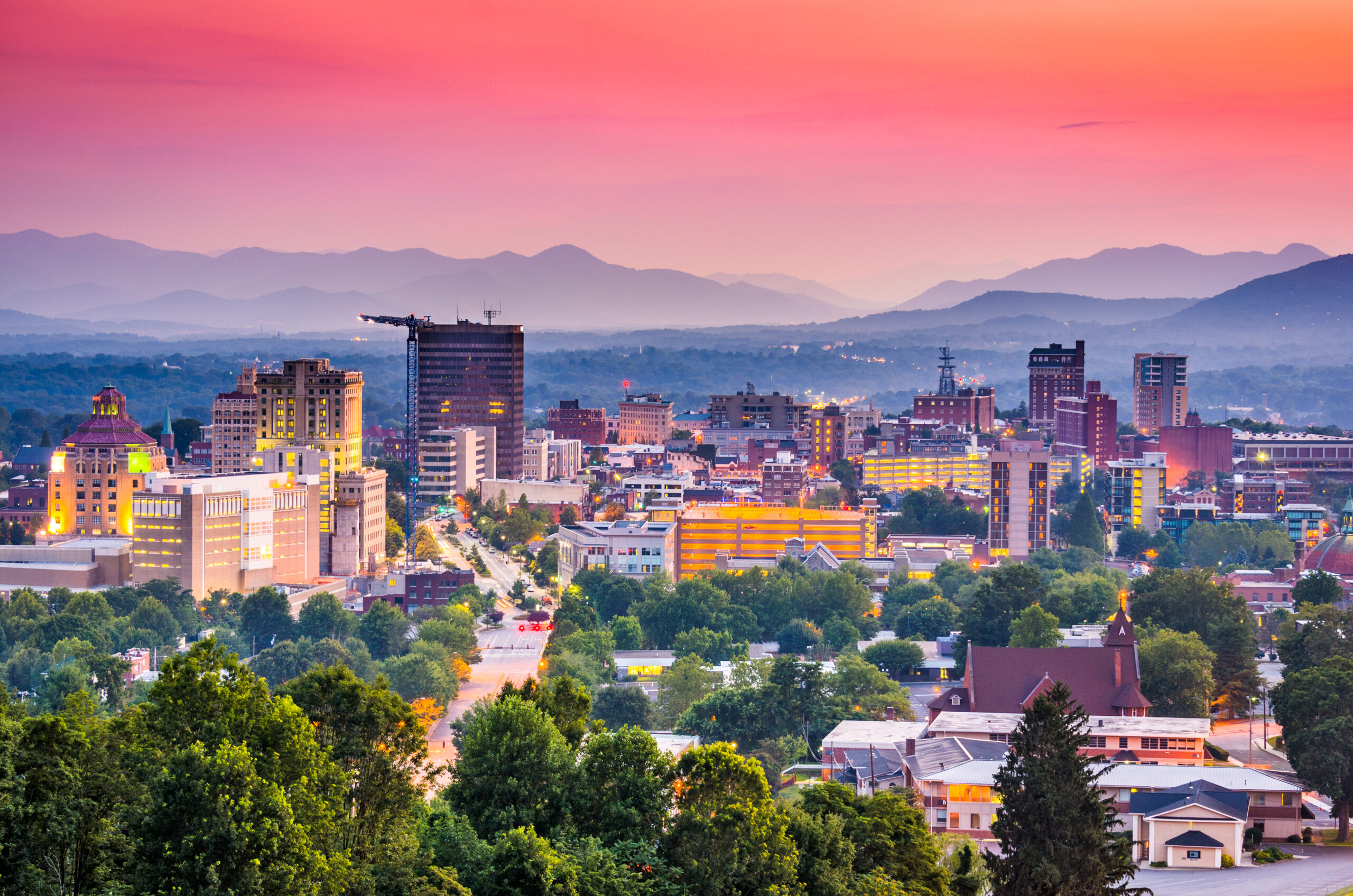 There is no ignoring the effects of gentrification in Asheville. But what are community leaders and citizens doing about it?

In 1964 the acclaimed sociologist Ruth Glass coined the term “gentrification” in a book of essays titled London: Aspects of Change, in which she wrote, “One by one, many of the working-class quarters have been invaded by the middle class — upper and lower – [and] once this process of ‘gentrification’ starts in a district it goes on rapidly until all or most of the working class occupiers are displaced and the whole social character of the district is changed.”

Fifty-five years later, many cities are experiencing rapid gentrification and affordable housing shortages, including Asheville, which NPR noted not long ago as ranking “2nd on a realtor.com list of U.S. cities that are gentrifying fastest.” In this interview between NPR’s Michel Martin and Professor Chris Cooper, head of the Department of Political Science at Western Carolina University, Cooper pointed out that Asheville “tells us a lot about the South — right? — and what the South is, and what the South isn’t, and how the South is changing. I think it does give us a lot of clues into gentrification, the good and the bad. I mean, yeah, this is an area that’s got, you know, James Beard Award-winning restaurants. But then if you drive 30 minutes outside of town, you’re in counties with real poverty, real Appalachian poverty.”

Of course, gentrification in Asheville has taken hold of some neighborhoods such as Southside, East End Valley, and Burton St. Community; a great way to learn about some of these historically African-American areas of town is through Hood Huggers Tours, led by artist, poet, and visionary DeWayne Barton. Guest Stephen Pohl said of the tour, “African-American historically had a well-defined, prosperous community in Asheville. Desegregation and urban renewal during the last half of the Twentieth Century decimated that community and scattered into public housing projects around the city. DeWayne’s Hood Huggers Tours gives us a glimpse of what happened and what the community is doing to reform and re-energize itself. All sorts of emotions come up during this tour.”

In discussing Asheville’s changing landscape, Mayor Esther Manheimer acknowledged that “a common theme is an affordability and affordable housing — a challenge people are feeling. We’re aggressively working on a down-payment assistance program.”

This program provides $5,000 to $40,000 in the form of a down-payment assistance loan and the City of Asheville pledged to make a total of “$1.4 million available to qualifying individuals and families to help them buy a home. The funding is from two separate funding sources: $1 million in Affordable Housing bond money and $400,000 in partnership with the Federal Home Loan Bank of Atlanta.”

But Manheimer also points out urbanization is not a uniquely Asheville problem: “The whole world is urbanizing. You used to have manufacturing, farming, tobacco — but now the jobs are more urban in nature, service, technology, whatever it is, the jobs are in cities. A lot of growth in America because of this.”

To gain inspiration for how to guide Asheville’s urban development and growth, Manheimer and other elected officials have visited Fort Collins, Colorado, and Portland, Maine. She notes one important difference between here and Portland: “Portland is allowed to put restrictions around hotels that they pay a certain amount into an affordable housing trust fund. In reality, while we’re not allowed to mandate that, we are allowed to negotiate for each application, so we’re actually getting more than they are from hoteliers with their process.”

Asheville’s Planning and Urban Design Director, Todd Okolichany, points to the Living Asheville comprehensive plan to help address some of the city’s gentrification issues. “One initiative to come out of the comprehensive plan,” he explains, “has been the Urban Centers project, designed to support reinvestment within key areas along the city’s commercial corridors. The intent is to foster higher-density mixed-use development that is economically viable, pedestrian-oriented, and visually attractive. Affordable housing will also be incentivized in these areas.”

City manager Debra Campbell urges those who are concerned about the negative effects of Asheville’s growth and development to remember that these “are signs our city is alive. Being alive is good. With intention, we can guide development to contribute to a thriving, healthy and sustainable neighborhoods, and business centers. It starts with a solid vision plan that is built on input from every facet of our community. A thriving, healthy and sustainable community also requires resources to manage zoning and permitting processes. These latter aspects relate directly to accountability in moving toward a community vision.”

To aide in building a collective vision, Asheville started the Urban Centers project as part of the Living Asheville plan. The goal of these centers is described as helping transition the city “in a direction that strengthens urban transit corridors and connects urban centers. This vision calls for land-use changes that add value and support reinvestment through denser land use patterns and enhanced multimodal transportation that improves walkability and neighborhood quality of life.”

However, Asheville native and realtor Elizabeth Putnam points out that Asheville’s affordable housing issues aren’t anything new. “Asheville has always had an affordable housing crisis since I was a little girl,” she says. “Many of my friends moved away because their parents couldn’t afford the lifestyle they wanted in Asheville. There is a reason that it is hard to find a ‘local’ in Asheville. Part of this has to do with the cost of living. Most of our jobs are in the tourism/hospitality industry, followed by healthcare. The incomes people earn in Asheville just don’t support the housing prices in the area, and this is why locals get priced out of the market.”

Adds Putnam, “On a personal level, it can be difficult to see people within communities being pushed out of areas because of development. Charlotte has done a lot of work with local organizations, communities, and local municipalities to help support local residents in communities facing gentrification. They have supported efforts within the community to support revitalization efforts without residents feeling disenfranchised.”

One half-billion-dollar infrastructure project that could do a lot of good in helping combat some of the negative effects of gentrification is the I-26 alternative, according to Joseph Minicozzi, owner of Urban3, a local company dedicated to helping communities uncover their economic story through a different approach to land value economics, property, and retail tax analysis, and community design.

“What if the connector could actually connect our community?” proposes Minicozzi. “We had over 100 people and 2,000 hours to come up with a new solution. Alternative 4B was presented to over 200 groups and continued to tweak the design. It’s truly a community-offered solution. In 2016, a minor miracle happened. But what we are going to get is all the highway traffic will not be. We got to reclaim dozens of acres designated to ramps and such, which provides us with more jobs, more revenue, and potential for more affordable housing — and if we’re lucky, a few more breweries. We get to give Asheville the gateway that it deserves,” Minicozzi concludes.

Improving connectivity in various ways is something Catherine Mitchell, executive director of the nonprofit River Front Development Group, explained at the June Leadership Asheville Buzz Breakfast, “What is a Connected Community?”

“Asheville has a very complicated history with its African-American community,” she said. “It has witnessed the destruction of almost every place of church, work, and entertainment. We propose getting around that by having a museum that showcases how we lived and how we will thrive for the future. Asheville’s policy is disconnected from its actual function. Next month marks a year since the funds got approved. The trail will start at the East End community Stephens Lee it was the old high school for African Americans, and it will attract visitors from WNC.

“These projects were developed and dreamed in 2010. Now, it’s 2019, and we are still working on it. Be assured, those nine years have reflected our determination. It will happen! And the Asheville story will include its whole story…we want to be a part of that. that’s how we build a connected community.”

The full vision for what our leaders are striving for Asheville to become can be found in the 392-page “Living Asheville: A Comprehensive Plan for Our Future,” which outlines that some of the plan’s initiatives:

“Leveraging redevelopment to create affordable housing, better infrastructure and vibrant places. As opposed to the urban renewal programs of the 1950s-1970s that negatively impacted communities of color and exacerbated segregation in Asheville, ensuring equity and robust public participation would be a hallmark of any strategic redevelopment program. Further community conversation to understand the lasting impacts of urban renewal and other current issues, such as gentrification, must also occur.”