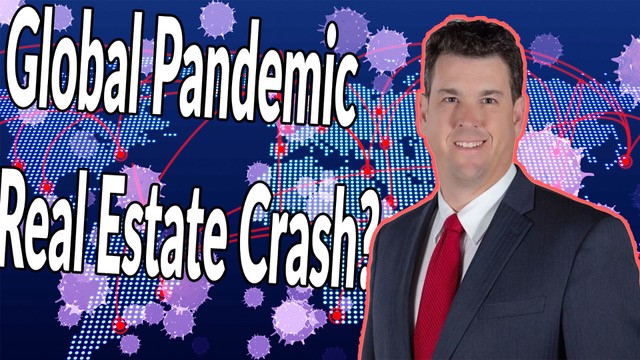 Karl Krentzel may have a more pessimistic view on ways the pandemic will affect real estate, but he’s seen this kind of thing before. When the federal government intervenes in real estate, he has insight into what’s coming and how to prepare.

Karl got his real estate license in 1996 after retiring from the Navy and started in Charleston, SC, where a bunch of “old salts” showed him the ropes. This was not the MLS of today – there was no real internet and the MLS was a series of printouts. Even as he was learning the industry, an unprecedented event struck the area.

The nearby naval base closed and banks gave people the opportunity to sell property or the bank would buy it at appraised value. When the federal government intervened, its offer was to buy homes at retail value. Within a few  months, 6000 homes flooded the market. This had long-term implications. The government then offered those homes on the MLS below market price with a 6% commission offer instead of the typical 3-3% split. The average homeowner that Karl was representing would have to pay 9% to their agents just to compete with the government. Ultimately, most homeowners decided to not compete and keep their homes. In the short term, government homes sold but at depressed prices, so prices went down in the area as a result.

So Karl learned an important lesson early in his career: pay attention to what the market is doing, and be aware of the government’s interference.

Karl left South Carolina for his hometown of Tucson, AZ, got re-licensed, and started selling homes there. Soon, he met a man who fundamentally changed his life. When Karl asked him about the trophies in his office, the man told him about his gig working on REOs. Real Estate Owned homes are foreclosures with government or corporate ownership. Kar’s new colleague had a huge file cabinet with information and addresses known as BPOs. These Broker Price Opinions were what he created for the banks or government when they foreclosed on homes. They ask him, the broker, to set the price for the home.

Among the real estate industry, REO work is not highly-regarded. Dealing with angry tenants and dilapidated properties is not ideal compared to million-dollar homes. At the time, Karl was working on for-sale-by-owner properties and expired listings, which was very time-intensive and not glamorous either, so he decided he’d rather work with corporate people instead. Even though he didn’t have much economic insight, Karl knew from his experience in Charleston that what comes up must come down.

The market got better, and he did buy & flip homes while still keeping his finger on the pulse of the REO market. Karl worked with lots of big banks doing their BPOs, then 2007 hit and everything changed.

Karl began to see BPOs spike. Banks, credit unions, pension funds and the like were trying to leverage their assets. Instead of cheaper homes, banks were foreclosing more and more expensive properties. He started putting the pieces together in his mind, drawing the conclusion that a crash was coming.

Agents were dropping off the MLS quickly, losing their income. With a foothold in the REO industry, Karl’s cash flow soared. Agents tried to get into the industry with him, but it was locked – and he was in.

The Government Steps In

A period of steady REOs continued until the federal government began a massive qualitative easing program. Karl describes this process as “money-printing,” a practice that affects the economy artificially, devaluing the dollar. Compounding this, the government instituted low interest rates and eased credit restrictions, allowing lenders more liquidity to offer more loans, allowing more people to buy property. Instead of a huge crash, we eased into the recession.

The government also halted foreclosures for 90 days to ensure they didn’t do so illegally, which caused problems for investors, agents responsible for properties and the utilities on them.

Karl had to raise some cash to support his properties through this, and he heard about wholesaling. After he began, he soon became a coach to help others find the right information to get started themselves. This turned into a podcast, and his renown grew as an expert in the field.

2020: The Pandemic Affect on Real Estate

Because of mass protests in Hong Kong, then the corona virus and enforced lockdowns, Karl anticipated an economic calamity. Monetary policy in the USA has real-world effects, and we are in debt heavily, especially to China. In Karl’s opinion, the same circumstances that began the Great Depression are happening now. COVID-19 was the needle that burst the bubble, but he says the bubble is the problem. The federal government is trying to reinflate it, but that’s not the solution. If the government didn’t bail out the economy, there would be a massive de-leveraging of assets.

Good agents and investors, Karl says, will look at the long and short term when making decisions, analyzing data to find out why average home prices and mortgage applications are up. In the next 3-6 months, we’ll probably see prices go up due to short demand and artificially-low interest rates. With low interest, the seller can ask for more money. When they do so, aggregate home prices go up. How long will that cycle last? Is it possible to keep adding money and raising deficits and surviving on a low gross domestic product (GDP) due to mass unemployment?

Be Proactive and Prepare for the Worst

Pensions have no value. Political unrest. From corona virus shutdowns to the unrest, all the stoppages cost money. The federal government is broke and printing money they don’t have. Does that seem harsh? People hesitate to talk about the negative implications, but reality is that negatives exist. We need to examine how we get to the bad places so we can get through to the good ones.

Think critically and use the system to your advantage. Be prepared so there is no net loss.

Karl is taking his profits and buying gold & silver, as he believes the dollar will inevitably crash. What do you think will happen?

Listen to Karl’s podcast and check out his website.

Saving Money to Achieve Your Goals