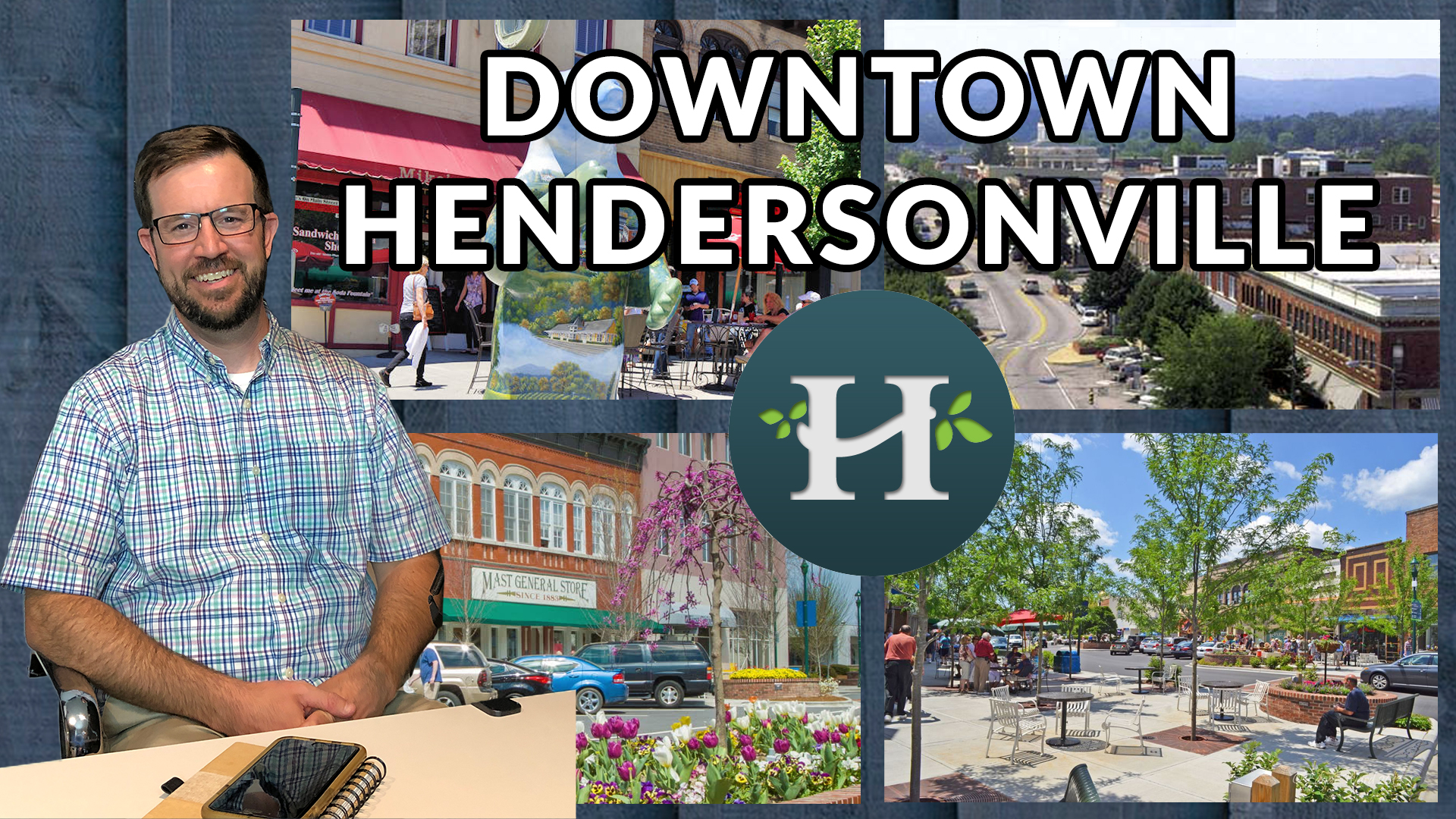 While it can be tempting to think of Downtown Hendersonville NC as a kind of suburb of Asheville, it is, in fact, a city all its own.  It has its own economy, its own tourist draws, its own unique challenges and successes, and, as Lew Holloway can attest to, its own thriving downtown.

Holloway, the Downtown Economic Development Director for Downtown Hendersonville NC, knows this last point better than anyone.  Having worked as an urban designer in Asheville for a number of years, he is well aware of the many differences between the two cities, and has worked hard to help Hendersonville grow and thrive in its own way.

In large part, the success of this endeavor has been due to the Main Street program, which Holloway describes as “economic development based in historic preservation.”  The program, which exists in various iterations across more than 1,600 communities throughout the country, began in response to the recognition that historic urban fabric was being lost due, in large part, to significantly changing retail trends.  The stores that once supported the downtown areas of cities across America were moving to malls, causing those downtown to struggle and leaving behind empty buildings. The Main Street program seeks to preserve those buildings and historic downtowns, and to build them back up again.  Hendersonville moved its Main Street program in-house in 2011, opening up the opportunity for Holloway to come on board and work from within to revitalize historic downtown Hendersonville.

Since he moved to the helm of the program, Holloway has seen Hendersonville change significantly – where it used to be largely a retirement destination, now more young families and individuals are moving to the areas.  In fact, he says, 60% of migration to Hendersonville in the past three to four years has consisted of individuals in their twenties, thirties, forties, and fifties. This diversity in age group, he says, is good for Hendersonville as a whole, and contributes to the increasingly vibrant culture of the community.

Of course, there are always those who would prefer not to see things change.  Communities in Western North Carolina that are in the midst of great population growth, Holloway says, are also seeing their communities changing very quickly.  That can be difficult to cope with, and people do tend to push back against change, at least at first. He cites tension in the community surrounding a variety of topics related to growth, including infrastructure, traffic impact, and so forth.  This, he thinks, is valuable and important – before trying to accomplish something today, Holloway says, it’s important to think about what those changes will look like in ten or twenty years and plan accordingly.

With that said, Holloway points out that any time you have change, especially rapid change, there will be people that benefit and people that don’t.  The most important thing about this disparity, he says, is to “figure out how you balance that.” To help assuage some of the concerns that residents may have about growth, Holloway likes to tell people that it’s better to have to worry about too many people wanting to move to Hendersonville than to have to worry about people leaving and the local economy failing.  And, because the core of what the Main Street program and the downtown economic development program is trying to achieve is the preservation and repurposing of historic buildings to maintain the culture and history of downtown, some of the change that residents are seeing is a little bit easier to swallow.

“My charge really is to work with property owners and business owners in those districts to promote their success,” Holloway says.  “At the end of the day it’s to create a vibrant business community, to address the issues that come up in those kinds of communities.”  While change is inevitable, a focus on the businesses, people, and buildings that are already in place helps to make that change more palatable and less disruptive to those who have called Hendersonville home for many years.

Furthermore, the program doesn’t seek solely to draw in new visitors and residents; it also hopes to add value to the downtown area for those who are already living in Hendersonville.  The monthly Rhythm and Brews concert series is one great example of this push – similar to Asheville’s Downtown After Five series, the Rhythm and Brews series, which began in 2013 and occurs on the third Thursday of every month from May through September, is designed to cater specifically to those who live in Hendersonville, and not to tourists.  “We recognized that we had a changing demographic,” Holloway says, with younger people who had different interests and wanted to be able to go out and enjoy their downtown throughout the week. “It’s a unique kind of economic development-slash-community development that really tie together.”

Tensions don’t just exist between the long-term residents and the new, though, or between those who live in Hendersonville and those who are just visiting.  There is also tension between the owners of real estate in downtown Hendersonville and the businesses leasing that real estate, particularly given the push for preserving historic buildings.  For Holloway’s part, it’s important to work with both. “We really work to engage property owners and business owners, because I think it’s so important that you work to establish what the challenges that each face are…It’s trying to get a sense, really, of what those two needs are,” even though they don’t always align perfectly.  Because he and his department don’t have a specific loyalty to one party or the other, they’re able to focus on sharing information and helping to mediate, in a sense, between the two to best serve downtown Hendersonville as a whole.

And that, ultimately, is what Holloway’s job comes down to: he is accountable to downtown Hendersonville itself, and has a responsibility to protect and promote it as best as he can.  And, in doing so, he hopes to see the downtown area and Hendersonville as a whole continue to grow and thrive, and to succeed not just as an outlier of Asheville but as an independent city of its own.